Gone But Not Forgotten

It is with much sadness that we have to let you know that we have lost our beautiful boy Chip. He had five exceptionally happy years with us, we loved him very much and was devastated to have to have him put to sleep on the 26th September.

We miss him so much , the house is too quiet and all the shoes and slippers are exactly where we left them! He used to bring a shoe or slipper, whatever was to hand or should that be paw, to us as we walked in through the door. Chip is playing now with our other doggies we have lost, no more pain for him.

We were so lucky to have had him in our lives, we just wish it could have been for longer. He will be forever in our hearts.

6 years a go we came and adopted our beautiful little Springer from your kennels. (Purdy) sadly last Sunday 10th September we had to have her put to sleep.Purdy had Bowel Cancer which was first diagnosed October 2016, when she had a growth removed from her bowel. We new we were on borrowed time but Purdy seemed to make a good recovery and for the past 11 months she was just like her old self fit and enjoying her walk, food, loves. I don't know if you remember Purdy she had I believe come from a puppy farm and been used for breeding, locked up for long hour's.

She was not in your kennels long, she was in a foster home and you could not pick her up because we had bad snow that year and you were unable to fetch her. We came up from Coventry, and I remember one of your Kennel staff (Garth) carrying her out for us to see, we fell in love with her straight away and never stopped loving her.

We have had many dogs over the year's But Purdy was an exceptionally special dog, she ticked all the boxes that anyone could wish for in a dog, she was gentle, did'nt bite good with children, walked good on a lead, good recall, good in the car, never ran off, sat out side our front door and greeted everyone. We belong to a dog walking community and we walked with Purdy 3 - 4 times a day, everyone loved Purdy, and she has been missed by so many people.

Right now our hearts are broken, and don't know if we will have another dog, as time heals if we do decide to, then I would most certainly contact Ceaser.

We would like to thank you for giving us the opportunity to have had such a special dog.

It’s with great sadness and a very heavy heart that I have to inform you that Barney (formerly Buddy) has passed away.

After a short illness suffering from a blood disease he passed away on 10th May.

He seemed to be responding well from medication, but took ill on the Tuesday, and after an overnight stay at the vets passed away early Wednesday morning.

We travelled to you from Lincolnshire in August 2011 after spotting him on your site. We told everyone” we’re getting a dog!” Oh that’s nice they said, “He’s a rescue”, Ohhh! They said, “He’s a Springer”, ARE YOU MAD they said.

To be fair for the first few months we did wonder!

In that time Barney did show aggression, and did bite a neighbour, resulting in a couple of stiches! Worrying times.

He needed time, space and leadership, and lots and lots of love. 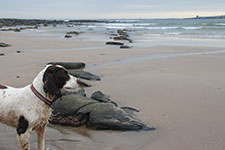 Boy were we rewarded, in the six short years we have had the honour of sharing our lives with him, he has given us so much in return.

He has been our friend, our comfort and always our shadow, where we were, he was.

He has had two cruciate ligament operations in that time, but has led a full and enjoyable love filled life, appeared as ‘Mr December’ in your 2013 calendar, and travelled on some fantastic holidays in the Scottish highlands, Northumberland, Norfolk and Suffolk. 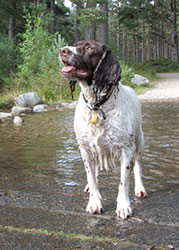 It is with great sadness that our Springer Tammy had to be put-to-sleep yesterday.

She had been abandoned after a traffic accident with a shattered front leg. We picked her up from the vet who had pinned her leg back together again on the 10th December 2002. The intention was to foster her until she was fit enough to be rehomed. Within days, she had stolen the heart of our dog Jasper and our hearts followed – so we adopted her.

Once her leg had repaired, she loved running and chasing a ball. And she adored swimming. If there was water she had to be in it – even to the extent of breaking an ice covered lochan, which I had to go in to get her out.

Tammy loved her food she appeared to have an internal clock and always let us know if we were running late. Her favourite was Sunday breakfast when she joined the rest of the family with sausages!

She was such a happy and adorable little Springer who enriched our lives. Tammy had wonderful holidays in the Highlands of Scotland and Wales, long walks especially in the forests. We have wonderful memories to treasure of our Tammy who was dearly loved and gave us so much happiness.

Ian, sadly we must let you, Di and all at Caessr know that 2 weeks ago we had to let Kell be put peacefully to sleep, age about 13 - 14.
He came to us from you in 2010 when you were not long established. We have kept in touch with you occasionally throughout his time ( he has featured in several CAESSR calenders ! ) with us so you will know he had several roles during his time with us - pet, brilliant gundog, companion, gardening dog and PAT dog. He had his problems but was a kind and loyal dog who just loved to be with people.
He is missed so much - all his funny little ways - he became 'grand-dad' to the rest of the dogs and always let us know when one of them was not feeling right.
He is buried just beyond the garden on the edge of the farm which he loved being part of.
Thank you so much for letting him be part of our lives.